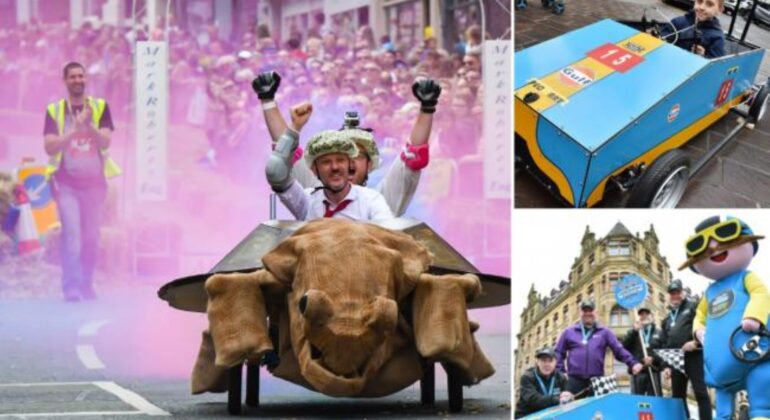 Soapbox racing is coming to Bradford later this year, with organisers hoping the wacky event will draw crowds of around 20,000 to the city’s streets.

Bradford Business Improvement District (BID) is bringing the Super Soapbox Challenge to the city centre on May 1, for the first time.

The BID, which is funded by more than 600 levy-paying businesses and organisations to help promote and develop the city centre, had hoped to stage the event last year but it had to be postponed because of the Covid pandemic.

Following the success of the big festive fireworks display in November, the BID is determined to bring more crowd-pulling major events to Bradford’s retail core.

BID chairman Ian Ward said: “It was a huge shame that we couldn’t stage this last year because the announcement prompted a brilliantly positive reaction and there was genuine excitement starting to build up.

“Now that the Plan B restrictions have been lifted, we have a great opportunity to get this fantastic event off the ground and get people coming back into the city centre to see just how much we have to offer while, at the same time, supporting local shops and venues which have been badly hit by the pandemic – AND raising money for charity!”

The BID is the principal sponsor of the Super Soapbox Challenge but further support will be needed from local and regional businesses to help get it off the starting grid.

BID manager Jonny Noble added: “We really want to make this happen for Bradford but delivering an event of this type will require partnership working and a number of sponsors to come forward before we can fully commit to it.”

“Experience elsewhere suggests it will be great for the city centre and is likely to become an annual event if we can get the first one off the ground.”

The course for the races is still to be finalised but will see carts run downhill through the city centre. It is being staged by The Super Soapbox Challenge Company, which has had success with similar events elsewhere.

Individuals and teams taking part in the event will be able to use it to raise money for charity, and schools and charities themselves will also be encouraged to enter. Businesses can enter corporate teams to build and race their carts.